For the land of the free, and the home of the brave
where the brave means taking a step outside of my parents’ home
and recognizing I’m in a target zoneMy leg, 2 cops go free unknown.
My stomach, 4 cops.
My neck, 6 stomps crushing my bones
My head? no need. I’m already dead.
It shouldn’t make sense that I’m so tense,
that I literally shake in the presenxe of civil defense,
that my life is a story and it’s always full of suspense,
because tomorrow is not a promise to me and the black community.
I have a degree in police brutality,
taken 16 years of this native language, spoken intentionally
yet I don’t enunciate fluently because je ne comprends pas pourquoui le
racisme est ici.

Brave means attending an institution
that uses the mathematical art of substitution
to replace black excellence with the laws of isaac newton.
I speak proper english for I only wish
people could see me as perfect.
It’s a different tongue I use around the school,
not to look cool, but so I look more pronounced and stand out in the
college application pool.
I utilize every opportunity propelled, kicked, shot at me
and collect the information in its entirety.
Do you see my broad vocalbulary?
Secondary resources is what I rely on to succeed
because I can’t change the fact that my education cost whiteTEEN.99
This system’s education was not built for a black girl named caroline;
a girl who believes
in the idea of diversity, but has yet to see her wish for appreciation for
her melanin skin come true.

Sometimes, I just have to wonder,
What would Francis Scott Key think
If he were to witness what happened in our world today:
“The land of the free and the home of the brave”?
When writing those words, did he imagine
That those phrases were a lie?
That they defy the foundation this country was built on?
He should’ve written
“For your white supremacy and the home of the slave.”

Free means I proudly speak of black history
With no restraints, this is not the first time the truth
has disappeared because of this system’s fear that we are here,
together,
white and minority ears hear the same message, “change is near.”
It is everywhere we acknowledge that posting isn’t enough and
murdering is beyond too much.
It is white people memorizing Dr. King’s words:
“Injustice anywhere is a threat to justice everywhere.”
It is understanding that protests are peaceful until the police become
lethal.
It is knowing the names of every single slave that survived the plague
known as today.

We don’t demand justice, we deserve it.
It shouldn’t be some prize we have to idolize, rather a goal we can control.
Much like how the national guard proposes the use of guns and
horses
To trample our justified ideals and hopes, to reveal that black lives
matter should be real.

George Floyd gasped for air, not only because he couldn’t breathe, but
because he couldn’t see
A future where his family was not screaming due to the knee of a
white man serving the system’s police,
Regis korchinski-paquet was falling for a few seconds, but some see
that time as worthless because it’s all the life she had left.
Our skin is confident, our being is prominent,
And I will not stop writing until we are not seen
as approximates, but as the full five fifths of a human.
But until then,
The question is when? 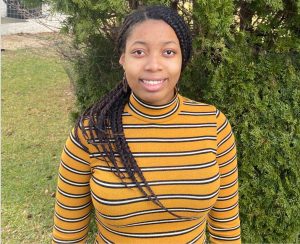